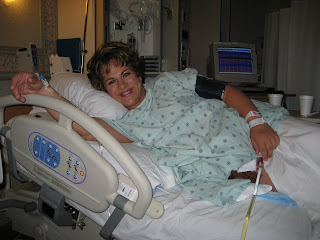 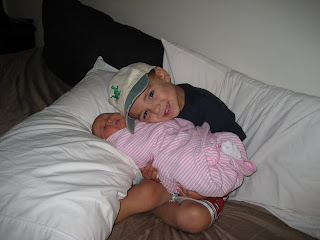 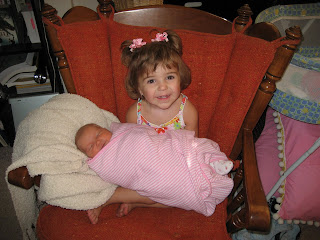 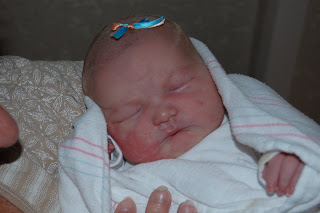 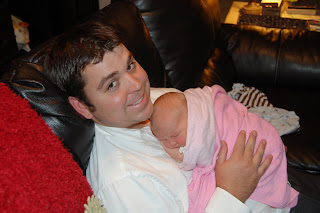 The last month of any pregnancy is always the longest. Everyday that you wake-up, even though your due date is still weeks away, you can't help but wonder if today is the day. From the way I looked, it seemed I had passed my due date months ago. In the beginning of August, I began to tell strangers that I was due any minute with twins. In reality, I had until the 9th of September before the big day, and my doctor had no intention of inducing me any earlier than the 2nd of September. I was dying. Every bone in my body hurt. Each day I hoped and strategized how to go into labor early, and every night I went to bed still very pregnant and very uncomfortable. Every morning as I complained to my mom she would tell me, "It will happen when you are not thinking about it." This statement would prove to be oh so true.

Then it happened. Something broke, and it wasn't my water, it was Olive's thumb. Days earlier, we had noticed that Olive's thumb had swelled to twice the size of the other. However, she never showed any signs of discomfort or pain, and she continued to use it like always. We called her doctor who worried it might be a blood clot caused by her central line. He had us admit her to the hospital Sunday morning to run several scans and x-rays on her hand. After several MRIs they determined it wasn't a clot, and an X-ray of her finger showed that it had been broken. They drew some blood labs to test for any infection that might have settled into the joint, and told us to return to the doctor Monday morning. I scheduled her an appointment to immediately follow my weekly checkup with my doctor.

At this point in my pregnancy, my appointments have become quite bit more involved. At each visit, the doctor must determine how far I am dilated and how soon I might deliver. This involves some compromising positioning that I felt my two toddlers did not need to see. I had my friend Kelly Whitlock meet me at the doctor's office so she could watch my kids for me while I saw the doctor. As I pulled up to the hospital, she was standing in the parking lot waiting for us to arrive. She came over to help me unload the kids from the van. As I bent over to help Rex get out, my plans for the day completely changed. Within seconds, I was standing in a huge puddle of water, and I knew I hadn't wet my pants. There was no doubt, my water had broke. I was completely unprepared. My mom had been right, I was not planning on this at all. I could only think about how my house was a mess, and I still hadn't packed my hospital bag despite all my mom's warnings.

Kelly helped the kids and I slosh up to my doctors office. I was like Hansel and Gretel leaving a little trail of goo behind me everywhere I went. It was completely disgusting and I even left a puddle in the elevator. For this I apologize. I walked into the office, the doctor took a quick look at me, and told me this baby would be here by 4:00. They then sent me across the parking lot to St. Luke's to get my self admitted. By now, everything I was wearing was completely soaked. The most unfortunate part of the whole scene was the white cotton skirt I had chosen to wear that day. It could not have been a pretty picture. On our way down the elevator, Rex actually slipped and fell in the puddle I had left on our way up. I felt sorry for anyone who had to be around any of us.

By this point it was 10:15 in the morning. I called Richard and told him he had to come to the doctor's immediately. Olive still needed to go to her broken finger appointment, and then he needed to take the kids to Kam's house to stay. I then called my Mom to tell her to get her little self over here to Boise ASAP. I planned on her only needing 3 hours to get here from Pocatello, except she wasn't in Pocatello she was in Island Park. According to my calculations, the baby was going to get here before she did.

At a quarter to 11, Richard showed up and took the kids into Olive's appointment (sure enough her thumb is broken, but shows no sign of infection). Meanwhile, Kelly took me over to the hospital to help me get admitted. After filling out all the paperwork and donning a hospital gown by 11:45 I was hooked up to monitors receiving pitocin and having full fledged labor pains. By 1:00 I had them give me an epidural. By 1:10 I started to worry that Richard was going to miss the entire blessed event. At 1:15 he arrived and I expressed concern that I was feeling way to much pain for having had an epidural. They told me my legs should feel numb and heavy, they did not. They told me I would have a warm, fuzzy feeling, and my feelings were far from warm and fuzzy. The contractions started coming fast and hard and so did the pain. I felt everything. By 2:30 it was time to push, but Dr. Werdel had not yet arrived. They then told me to not push. Wait..What?!
Flying to the moon would have been easier. At the last minute my doc finally arrived.

Here is where my version of the story and Richard's version differ dramatically. I believe I then spent the next forty to forty five minutes fighting for my life and believing the end of my body as I once knew it was near. It was the worst pain of my life. I was sweaty and screaming "ouchy ouchy ouch!" until my little girl was born. Richard claims that I only pushed for eight minutes, swearing at the top of my lungs the whole time. Regardless, at 2:57 pm on August 31, 2009 little Lola Linly Ashcraft made her grand entrance. She was good and ready to arrive weighing in at 10 pounds and 20 inches long. Her name had been a source of debate for Richard and I for approximately 8 1/2 months. I loved it immediately. He was never sure. The un-medicated labor must have convinced him I was right. It is a beautiful name. Linly is a combination of Richard's mom , Kelly, and my mom, Linda's names combined.

We are home now, and it still blows my mind that I am a mother of three. No one has every even determined whether I should be a parent at all. Once home, it still feels surreal that I have another little girl, yet at the same time she seems such a natural and obvious part of our family. I hope you enjoy the pictures. The one of me on the hospital bed is the only one I ever took pregnant. It was obviously taken before the pain began. The ones of Rex and Olive are my favorite. They have taken to Lola in such an adorable way, and are always very interested in where she is and how she is doing. It is darling. For now, things to me feel just as the should: chaotic, messy, loud and exhausting. In other words, completely perfect.
Posted by Camille Pixton Ashcraft at 5:28 PM 10 comments: